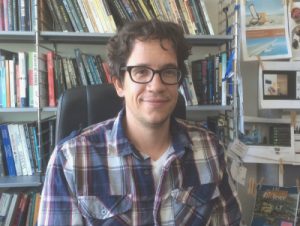 Patrick McCurdy (PhD, LSE) is Associate Professor in the Department Communication at the University of Ottawa.

His research draws from media and communication, journalism as well as social movement studies to study media as a site and source of social struggle and contestation. Most recently, Patrick’s work has studied the evolution of oil/tar sands advertising and campaigning from 1970 to present day with his project Mediatoil.

Mediatoil offers the public an online, searchable database of oil/tar sands promotional material and in August 2016 won first in prize in Compute Canada/SSHRC’s national competition The Human Dimensions Open Data Challenge. Patrick’s work has been published in several academic journals and he is the co-author of Protest Camps and the co-editor of three books Protest Camps in International Context: Spaces, Infrastructures and Media of Resistance (Policy Press 2017), Beyond WikiLeaks: Implications for the Future of Communications, Journalism and Society (Palgrave 2013) and Mediation and Protest Movements (Intellect 2013).